There’s an open letter from the English Wikipedia’s New Pages Patrol team to the Wikimedia Foundation and the Board of Trustees, which can be read at:

the background of which can be found at: 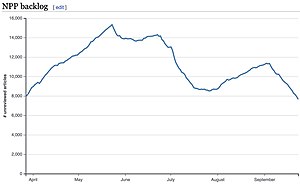 MB and Novem Linguae took on the task of joint lead coordinators of New Page Patrol this year following the long void left by other coordinators who had moved on. Kudpung was de facto coordinator for many years before retiring from it in March 2017. The views expressed in this article are those of the authors alone and do not reflect any official opinions of this publication.: Four years ago, in the October 2018 Signpost article NPP: This could be heaven or this could be hell for new users – and...

This is a request to devote ongoing resources to the page triage extension, which was developed to support the New Pages Patrol. If I’m reading this right, it looks like Page Triage was developed in 2012, received some maintenance in 2019, and hasn’t been maintained since.

One of my criticisms of the movement strategy is that it’s neglected some of the most important tasks of the movement beyond the projects - maintaining and improving the wiki software. Right now, it seems like the best way to get action from the WMF is to write a letter to the board that embarrass them into action. I’m wondering if there are or will be better ways for the community to prioritize the Foundation’s development resources, and to get resources allocated to development rather than other tasks.

@TomDotGov I have to agree with the point above that some recalibration of some type seems to be needed of the Movement Strategy team’s basic approach for identifying and addressing major priorities. For one thing the MS forum itself is supposed to be a new resource managed by the Movement Strategy team itself to generate greater community collaboration and discussion. Unfortunately it seems right now to not be effective in producing that as a result.

I’m saying that as someone who does believe deeply that the MS Forums site does in fact have huge positive value to the community as a potential resource and venue for major discussions, but it needs to be done in an effective way, in other words it has to be actively managed and run in a way that actually fosters real discussion, rather than hypothetically being a place for discussion of real topics, without actually achieving that role in a tangible sense.